Garena Free Fire OB31 Update: Garena releases a new game update every two months that changes the optimization of the game such as graphics, gameplay, weapon customization, and more. The name of the update that comes every month in the game is OB.

As we know, the OB30 update, released on September 28, 2021, brought many optimizations and features to the game, such as Leon and Otho characters, sniper and shooting processing guns, and more.

Now the developers have yet to bring in the new OB update, which will also make some changes to the game and add some exclusive items for players.

Players should note that the OB update will be tested on the advanced server before being released in the standard version.

The same process will be followed for the next OB31 update. OB31 Advanced Server is expected to launch on November 15, 2021.

In this article, we will share information about upcoming OB31 Advanced Server features. 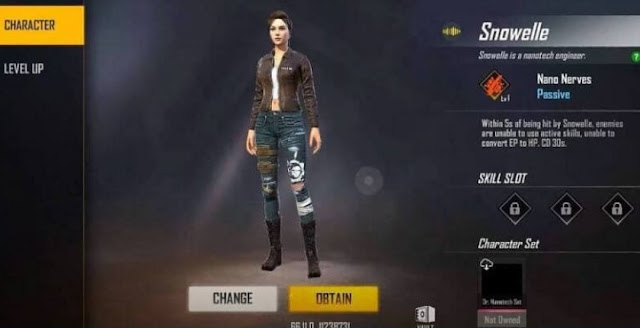 ASnowelle is a laboratory researcher. In addition, she is an expert in nanotechnology and robotics.

According to the leak, Snowelle is expected to be a female character. The name of her abilities is Nano Nerve and she is a passive ability character.

Usually during being hit by enemies, Snowelle’s abilities help us to freeze her active abilities for a time and also stop her conversion from EP to HP.

At max level, enemies’ active abilities will be frozen for 5 seconds. Additionally, the ability’s cool down will be reduced to 30 seconds.

According to the leak, Sverr is a star MMA fighter. Also, Sverr is expected to be a male character.

The name of the skill is Going Berserk, and he is an active skill character.

According to the leak, the skill uses 40 HP to increase damage by 10% at base level. The capacity cool down is 45 seconds.

Here is the list of upcoming optimizations and features:

NOTE: Players should note that the registration date for the next OB31 Advanced Server is expected to start on November 11, 2021.

The importance of Cloud Computing Security

The 10 main features of the new Windows 11 operating system

How To Download And Install The VPN Master For Windows?

View all posts by admin →